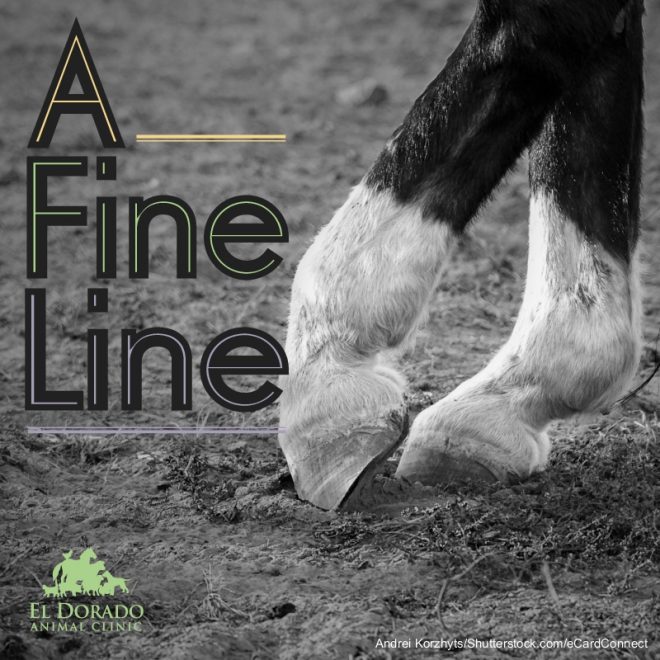 Poorly understood but widespread, white line disease (WLD) is an opportunistic fungal infection of the hoof. The fungi involved eat away the middle section of the horn wall, leaving behind an unsound hoof structure. The resulting hoof-wall separation may or may not cause an affected horse to exhibit lameness, and most cases of WLD are discovered during farrier care as an unexpected hoof-wall detachment. Otherwise, it is common for WLD to go undetected until an affected horse begins to show signs of discomfort.

WLD is a bit of a misnomer, since the white line isn’t involved in the affliction. However, this disease is also known by many other names including wall thrush, hollow foot, hoof rot, seedy toe and stall rot. Many hypotheses have been put forth for the cause of WLD, but none have been proven. It is thought that a small, mechanical separation can lead to invasion by opportunistic fungi which in turn leads to the development of WLD, but it has not been proven if the fungi invade first or the separation occurs first. It was once thought that poor hygiene was a cause of WLD, but since this has been shown to occur in well-managed stables as well, it is questionable if the connection exists.

When caught in the early stages, WLD is relatively easy to treat, but there are very few symptoms to indicate the problem exists. You may observe a small powdery area situated toward the upper plane of the hoof wall/sole junction or that your horse is exhibiting increasingly flat soles. Other early warning signs are the formation of a concavity on one side of the hoof and a bulge directly opposite, occasional heat in the feet and soles that show tenderness with hoof testers. As the disease progresses, so does the separation which usually involves the hoof toe and quarters. Additional symptoms you may observe could include a weak, chipped or shelly hoof wall, slowed hoof wall growth and lameness. The hoof may also give off a hollow sound if the outer wall is tapped with a hammer and the separation becomes obvious.

Horses of all ages, breeds and both sexes can be affected, and WLD can be found in one or multiple hooves. Barefoot or shod hooves are both susceptible to developing WLD.

Even though the cause of WLD remains unknown, it is believed that moisture may play a role in its development because it is seen more in times of transition from more or less moisture in the environment to the opposite. One of the things you can do to try to prevent WLD in your horse is to pay particular attention to hooves during these periods and not introduce situations that could mimic these conditions on the hooves such as avoiding turnout in wet pastures. But perhaps the biggest preventive measure you can undertake is to maintain a proper trimming and shoeing schedule. This allows for preservation of the integrity of your horse’s hooves and the opportunity to catch and treat small problems before they develop into big ones.

If you have any questions regarding white line disease or any other hoof afflictions that may be plaguing your horse, please contact our office to schedule an appointment.