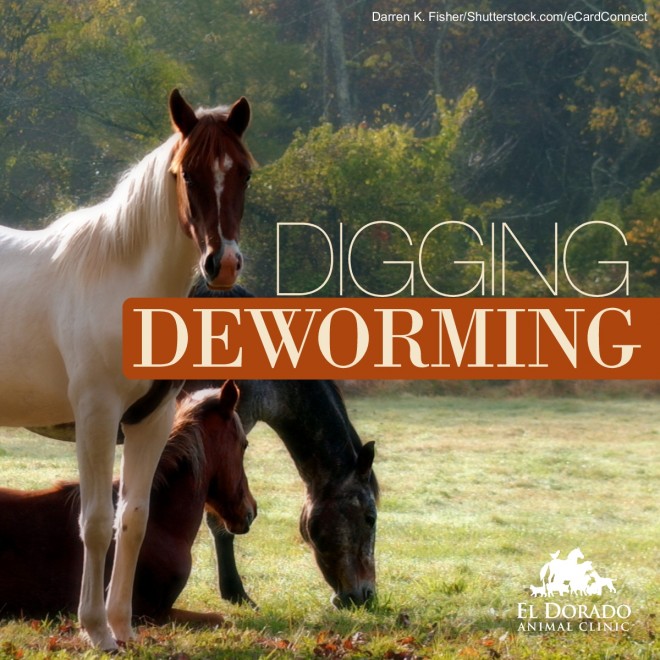 Drug resistance isn’t a human-only issue, with the last two decades giving rise to a number of equine parasite populations evolving to resist deworming medication. Repeated use of the same deworming drugs has created a resistance much like antibiotic resistance in humans.

When choosing a deworming program for your horse, there are two options — a periodic program or a daily program. The periodic program aims to break the lifecycle of the parasites by killing the adults before they lay eggs inside your horse’s intestines. When using this method, it is important to rotate different classes of medications so resistance is not created. A daily program aims to kill the early stage larvae your horse picks up in her mouth before they enter the body tissues. Daily dewormers minimize the internal parasite levels even if her living environment is heavily infested.

Seasonal changes in geographic locations also affect parasite activities and subsequent deworming programs. Strongyles, the most impactful internal parasite in mature horses, are greatly affected by seasonal changes. Generally, the United States are divided into two geographic regions, with the northern region being anything above 37 degrees N latitude, or north of the Ohio River, and southern region anything south of this line. For horses residing in the northern region, summer deworming is the best prevention for fall larval buildup. Horses in the southern region are subjected to larval amplification during the autumn months, once the high summer heat has diminished. Deworming for southern residing horses should begin no later than early October.

Deworming targets numerous parasites, including bots which require precise timing for treatment. Ideally, bot treatments should be administered after the first frost, diminishing the chance surviving flies can lay more eggs on your horse and lead to reinfection and further treatment.

A routine deworming program for your horse is key to her overall health. Though she may have a shiny coat and have a good weight, she could still have internal parasites. And with a host of ever changing deworming medications on the market right now, it is crucial to keep us involved in your horse’s deworming program to ensure you are using the correct products for the best results, given your horse and the specific parasites targeted. One of the best ways is to target the parasites specifically affecting your horse, determined through a fecal egg count reduction test. This two-step process analyzes the number of eggs in the horse’s manure sample before and after deworming. Ideally we would test each horse and foal on the farm, but we know this is not always practical, so we test a few adults and foals to determine the most problematic parasites.

If you have more questions about deworming or would like to set up an appointment to begin a deworming routine for your horse, please contact our clinic.