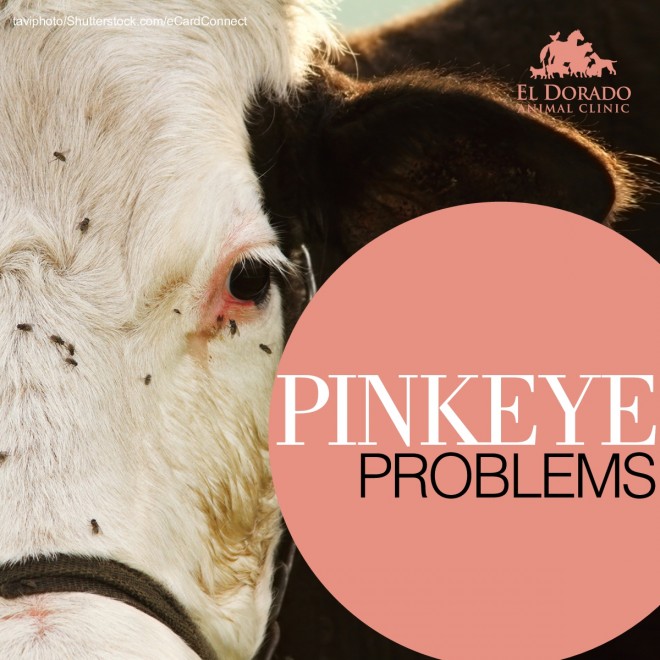 Pinkeye is a highly infectious bacterial disease affecting the eyes of cattle. The name identifies the redness and swelling of the lining of the eyelid and eyeball. It is one of the most common conditions affecting all breeding beef females and affects young calves more than adult cows or bulls but doesn’t prefer one breed over another. It is most commonly seen in the summer and early fall.

It is a non-fatal disease; however, it can have a significant impact on the financial health of the cattle-owner, especially if it spreads throughout the herd. Cattle affected by the disease often become at least temporarily blind and therefore do not consume as much feed, leading to economic losses due to lower weaning weights and decreased daily gain. Also adding to economic losses is the cost of treatment.

Face flies are the primary carriers of the disease, transmitting microbes causing the disease from one animal to another.

Common symptoms of pinkeye include:
– Heavy, watery eye discharge
– Signs of irritation and excessive blinking
– Reddening and enlargement of the eyelid, including the third eyelid
– Keeping the affected eye(s) closed, especially in the sunlight
– Weight loss due to lack of feeding

Pinkeye can be cured by treatment with medicine, but vaccines are readily available on the market. Should you find that pinkeye has affected any of your cattle, there are several keys to containment which include identifying the disease early, fly control, grass, weed and brush control, isolating new cattle and isolating affected animals to reduce the potential for spreading.

Contact us if you have any questions regarding preventive treatment against pinkeye or if you suspect one of your cows has come down with the infection.